CF can affect many parts of the body, but it primarily impairs lung function. The lungs in a person with CF are colonized and infected by bacteria from a young age due to poor mucus clearance, which results in chronic inflammation. This makes them susceptible to various infections, and seasonal influenza viruses in particular present a huge risk. When CF patients contract influenza, it can cause severe, sometimes life-threatening symptom exacerbations, making their lungs vulnerable to additional bacteria. Currently, winter CF exacerbations are difficult to treat.

Part of the problem may be an abnormal increase in activity of proteins called pattern-recognition receptors (PRRs) following infection. PRR signaling usually helps the immune system detect viral infection to begin fighting it off, but an excessive response to viruses can cause severe inflammation. 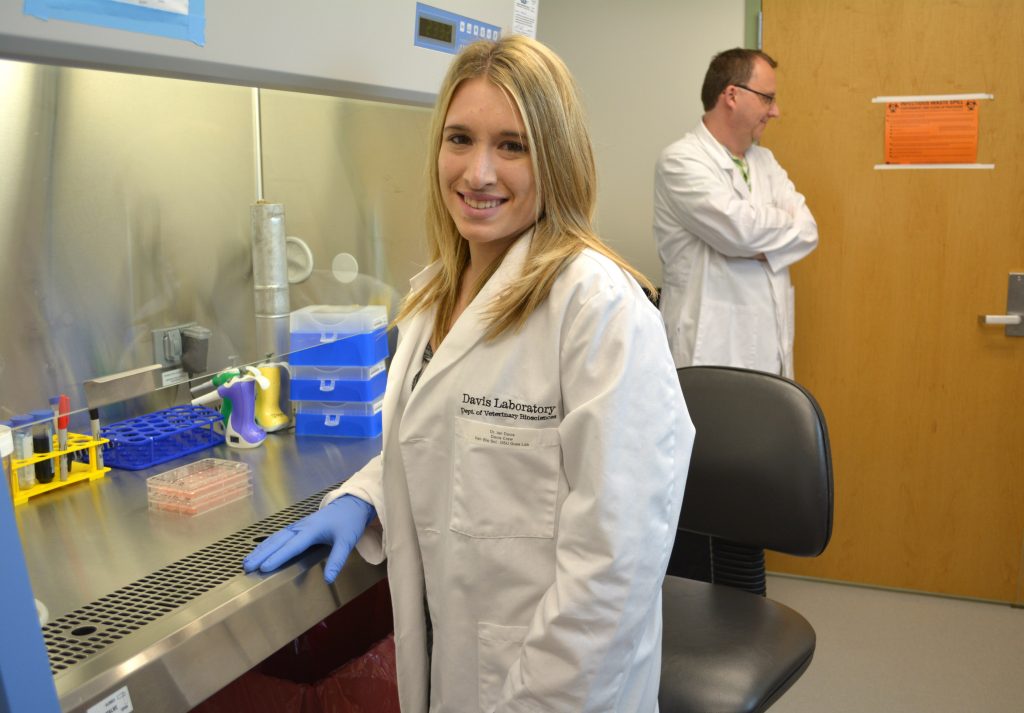 Second-year student Sarah Young is working with Dr. Ian Davis, associate professor in the Department of Veterinary Biosciences, to examine the molecular processes behind influenza infection in CF patients, specifically abnormal PRR signaling in infected lung cells. Young and Davis hypothesize that irregular PRR signaling causes the excessive inflammatory response in CF patients with influenza. To determine if their hypothesis is correct, Young is infecting both regular and CF human airway cells with influenza A virus to examine how PRR signaling differs between groups. The cell cultures that she’s working with use cells from donor lungs, gathered by Dr. Mark Peeples of Nationwide Children’s Hospital.

Once complete the study will provide new information on the natural immune response of CF patients to influenza infection, said Young, who was born with the disease.

“It’s rare to get the chance to research the disease you actually have,” she said. “It has given me more interest and motivation.”

CF is only known to occur in humans, but the study utilizes Young’s knowledge in veterinary medicine nonetheless, Davis said.

“Veterinarians have a great role to play in human medical research,” Davis said. “We have a different perspective, and there are not enough of us involved in it.”