We’ve all heard about dwindling biodiversity across the planet, but it turns out scientists have a difficult time actually verifying it.

Because it’s impossible to continually count every species in every location at the same time in the same way, studies on biodiversity are highly non-uniform, and they rarely look at one large area over a long period of time. Add in that biodiversity includes more than just how many species there are (it can also measure things like physical traits and genetic variation), and it becomes challenging to paint a picture of global biodiversity over time, said Marta Jarzyna, assistant professor of evolution, ecology and organismal biology at The Ohio State University.

This summer, Jarzyna is leading a new research project that addresses one of the biggest problems in measuring biodiversity: scale.

“Depending on the scale at which we measure biodiversity change, we might get very different results,” Jarzyna said, adding that factors of time and space — like the time of year the study is conducted, how often data is collected, the duration of the survey and its geographic spread — can significantly affect a research outcome. You could measure how many birds are in a forest every year, but if that measurement is taken in February versus August, or made weekly instead of yearly, the data would likely drastically change.

To combat these issues, Jarzyna’s team will use supercomputing to combine massive datasets of North American bird diversity from varying times and locations to identify trends in biodiversity change, as well as pinpoint climate change’s role in driving those trends. 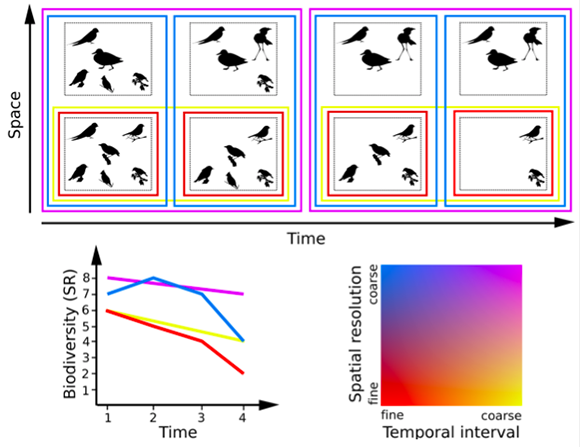 The potential effects of space and time on change in biodiversity (here, in terms of number of species)

The study, funded by the National Science Foundation, will look at roughly 500 bird species using data from large-scale bird surveys including eBird and Christmas Bird Count, largely the result of citizen science. Because each survey has its strengths and weaknesses — one dataset measures biodiversity every week but only spans three years, while another has data spanning 50 years but only includes annual measurements — fusing them into one model will create a clearer understanding of avian biodiversity.

“It’s a huge amount of data, and I’m hoping that it will provide a really good basis for how biodiversity changes across space and time,” Jarzyna said.

To account for the unique role each species plays in its ecosystem, the study will include data about diet type, foraging patterns, beak shape, wingspan and more.

“We tend to think o­­­f biodiversity in a simplistic way, but there’s more to it than the simple metric of the number of species,” Jarzyna said. “Each species comes with different qualities and characteristics, and they contribute to ecosystem processes in very different ways.”

Additionally, this information will be compared against climatic changes over the past 50 years to see where trends converge.

Jarzyna said she hopes the project can inform decision-makers on conservation strategies and set a precedent for measuring biodiversity in other species. Currently, birds are one of the few taxonomic groups for which this much data is available.

“The importance of big data is huge for understanding global biodiversity change, and I’m so grateful for all the citizen scientists who collected the data that made this project possible.” she said. “Having access to [verified] data that has been collected by others — that has made my career.”

Jarzyna’s team will consist of one postdoctoral fellow and two undergraduate students as part of the NSF’s Research Experience for Undergraduates program. The project runs from 2020-2023.