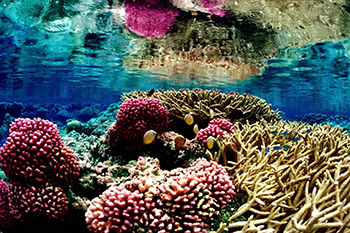 With their unique structures and breathtaking colors, coral reefs are one of the world’s most inspiring and appreciated natural wonders. They’re also greatly threatened by environmental stressors associated with climate change, including sea temperature rise and ocean acidification.

Some coral species are less sensitive to these climate shifts than others, and scientists have been trying to pinpoint the causes of their resilience in hopes of better managing reefs in the future.

Naturally, most research in this field is happening in coastal regions. But Andrea Grottoli, professor at The Ohio State University School of Earth Sciences, is conducting some of the world’s leading research on coral resilience — right here in Ohio.

Traditionally, scientists have examined the relationship between corals and their symbiotic algae (which gives them their color, as well as provides them with vital sources of energy) when studying resilience.

When under heat stress, corals may eject some of these algae, making them appear pale or “bleached.” If normal sea temperatures return, they can re-acquire algae, but prolonged stress leads to mortality, Grottoli said.

But there is likely another health component at play. Along with algae, corals also comprise intricate communities of unique and underexplored microbial organisms, collectively known as the microbiome.

Grottoli’s most recent study is the first to explore what role the coral microbiome plays in anatomical resilience under the combined effects of elevated temperature and acidity.

“A coral’s microbiome is thought to be a part of the immune system, just like it is in humans,” Grottoli said.