Butterflies are among the many species vulnerable to climate change, with even slight shifts in environment affecting the distribution and flight patterns of certain populations.

What better butterfly to study these adjustments in than Arctic (Oeneis) butterflies, which live in the harsh and changing Arctic regions they’re named after?

The Triplehorn Insect Collection at The Ohio State University is asking for the public’s help in creating a digital archive of thousands of Arctic butterflies, which were donated in 2015 as part of a larger collection from Ohio State alumnus David K. Parshall. The goal is to image and catalogue detailed data for each specimen.

“These species live in this area where changes are going to be happening and are already happening. Are they changing? Are they dying off? Are they moving to different areas?” said Luciana Musetti, curator of the Triplehorn Insect Collection, which is housed at the Museum of Biological Diversity.

Documenting when and where the Oeneis specimens were seen and collected over the years (the oldest is from 1935) will allow for comparison to modern observations.

Anyone can contribute to the project by making an account on Notes from Nature, a citizen science platform partially funded by the National Science Foundation, and navigating to the Arctic butterfly expedition. The museum has created a tutorial on reading, interpreting and entering the specimen data.

The second wave of data entry is complete and there will be two or three additional expeditions, said Musetti, adding that some of the participants are fellow scientists or retirees, while others have little to no knowledge of the field.

“It’s an exciting thing,” she said. “We are extending the knowledge about insect collections and getting new ambassadors for the work that we do by putting this material out there, so the investment of time and money is reverting in that way. It’s a different kind of outreach.”

While investigating the effects of global climate change is one long-term aim of the project, another is creating a database of high-resolution images for entomologists to reference.

“Not only are Oeneis butterflies on the bleeding edge of climate change, but there is still a lot of work to be done in terms of taxonomy and defining the different species and subspecies,” Musetti said.

In 2016, the Oeneis specimens at Ohio State helped confirm scientist Andrew Warren’s theory about the existence of an unclassified butterfly species. The Arctic tanana (Oeneis tanana) had “been hiding in plain sight in museums since at least 1955, masquerading as its relative,” according to a National Geographic article on the discovery, which marked the first new butterfly species identified in Alaska in nearly 30 years.

Discoveries like the Arctic tanana make it important for the museum to be precise and detail-oriented when imaging the butterflies, said Jordan Reynolds, technician and photographer for the Triplehorn Insect Collection and a 2017 alumnus of the Department of Art. 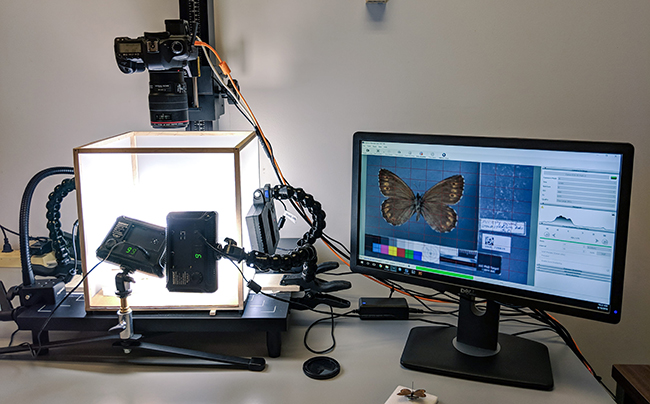 A butterfly specimen ready to be imaged at the Museum of Biological Diversity.

“Each final image is composed of 14-16 images, which are stacked together through an algorithm,” said Reynolds, adding that with the help of student staff and volunteers, they can typically image around 16 specimens per hour.

So far, about 5,500 Arctic butterflies have been photographed, with hundreds more to come, Musetti said. The larger Parshall collection contains roughly 100,000 moth and butterfly specimens. Arctic species mainly come from the U.S. and Canada and were collected between 1935-1987.