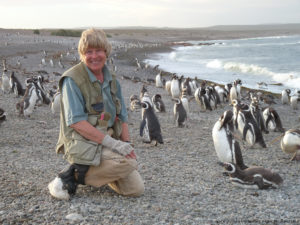 Dee Boersma has been called the Jane Goodall of penguins.

An adorably curious, roughly 2-foot-tall Magellanic penguin she’s named Turbo greets her year after year on the shores of Punta Tombo, Argentina, where Boersma has studied the health, behavior and population dynamics of penguins like Turbo for nearly 40 years.

Boersma’s work with both Magellanic penguins and Galapagos penguins has led to an enormous, invaluable archive of species data and the creation of Marine Protected Areas in both Argentina and Ecuador. She has built nests out of lava rock in the Galapagos Islands to increase penguin reproduction; convinced the Argentinian government to move oil tanker lanes farther offshore, considerably decreasing the occurrence of oiled birds; proven a link between climate change and the declining population of Magellanic penguins; and tirelessly worked to spread the message about wildlife conservation.