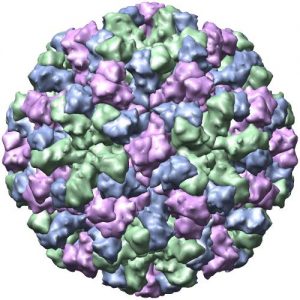 Human norovirus is contracted by 21 million people per year in the U.S., and is responsible for more than 60 percent of annual foodborne-illness cases, according to the Centers for Disease Control and Prevention.

Symptoms of norovirus infection include vomiting, abdominal pain, diarrhea, fever and dehydration that can last up to several weeks. The virus is resistant to commonly used disinfectants and easily transmitted through food, water or close contact. Since its discovery in 1968, regular outbreaks have occurred in crowded spaces such as schools, restaurants and cruise ships.

There is currently no vaccine or treatment for norovirus, and several factors prevent it from being extensively studied. Since the virus doesn’t replicate outside of bodily tissue, it cannot be analyzed in cell culture, and traditional animal models cannot be used because the virus doesn’t infect mice and other small mammals.

“So we basically don’t have any tools to study this virus, which is quite frustrating in the field,” said Dr. Jianrong Li, associate professor at The Ohio State University College of Veterinary Medicine. “For these reasons, we don’t have a vaccine or antiviral drugs for the virus. It’s been a big puzzle for about 50 years.”

Despite these issues, progress has been made by Li and his research team, who were able to identify an animal model to study norovirus. They found that gnotobiotic, or germ-free, pigs are able to contract an infection from the virus, and can therefore be used in their research.

Li’s team recently received a five-year, $3.1 million R01 grant from the National Institute of Allergy and Infectious Disease to continue their work on developing a human norovirus vaccine. Li’s collaborators include Drs. Prosper Boyaka, Xiaoming He and Steven Krakowka, all investigators at The Ohio State University, and Dr. Xi Jiang of Cincinnati Children’s Hospital Medical Center.

The vaccine’s molecular composition is basically complete, Li said, and has proved effective in germ-free pig models. The researchers’ next steps are to enhance the vaccine’s effectiveness and to identify a suitable delivery method.

“The vaccine is actually quite simple. It contains Virus-Like Particles (VLPs) or P particles, which look like norovirus but they’re not infectious,” Li said. “So you can use VLPs to generate a strong immune response in which antibodies neutralize the virus. The body will remember this and become resistant to norovirus.”

One issue with the vaccine concerns with how it can be safely delivered orally without first being destroyed by the gastrointestinal tract.

Li and his colleagues will solve this problem by inserting the vaccine inside several layers. The outermost is a micro-particle that is resistant to stomach acid, and the second is made of lactic acid bacteria (LAB), which is a probiotic found in foods such as yogurt.

The idea is to enclose the vaccine inside a LAB-based capsule to be taken orally. The capsule only allows the VLPs to be released once they reach the intestines, so that the body can generate a proper immune response.

Li’s team is now working on improving the strength of the vaccine, which will be done by adding a molecule that targets specific cells to enhance the immune response.

“The goal after these five years -if the improved vaccine is effective in pigs- will be to test it on non-human primates,” he said.

The ability to create and test a human norovirus vaccine is a notable scientific breakthrough, and this model may lead to the invention of vaccines for other viruses.

In addition to the NIH R01 award, Dr. Li has been awarded four grants from the U.S. Department of Agriculture totaling to $36 million (one $25 million, two $5 million and one $1 million) since 2010 for research on norovirus. He was Principal Investigator or co-PI for each study.

“Our ultimate goal is to develop effective mitigation strategies and vaccines for human norovirus,” Li said.