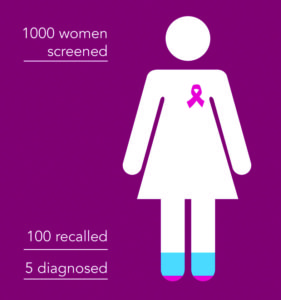 As part of Vice President Joe Biden’s $1 billion Cancer Moonshot initiative, hundreds of scientists and coders are attempting to improve the ability of mammograms to detect breast cancer.

About 100 out of every 1,000 women to get a mammogram will be recalled for further testing, but only five will be diagnosed with breast cancer, according to the American Cancer Society. This is largely due to issues in technology and image readability, especially as breast density increases.

“The breast is a three-dimensional structure, and standard mammograms take a two-dimensional picture of it,” said Dr. Jeff Hawley, breast radiologist at The Ohio State University Comprehensive Cancer Center – James Cancer Hospital and Solove Research Institute (OSUCCC – James). “Sometimes the tissue can overlap on the image, and that’s usually the cause for us to recall patients who are actually cancer-free.”

Yet hospitals have had trouble improving the mammogram recall rate, despite efforts to utilize computer-aided detection (CAD) software, he added. In theory, CAD software can draw radiologists’ attention to subtle cancer indications that they may not have otherwise noticed. But many radiologists, including Hawley, find the current versions to be of questionable value.

So experts are teaming up in a large-scale, online competition to develop new computer algorithms in hopes of advancing mammogram readability.

“I think in the era of computer learning, it’s certainly possible,” Hawley said.

The data-driven, open-source challenge lets participants train their computer models on 640,000 de-identified mammograms, said Dr. Thea Norman, director of strategic development at Sage Bionetworks and one of the competition’s organizers.

“This is not to imagine that an algorithm could replace a human being’s set of eyes,” Norman said. “It’s about asking the question of whether an algorithm can be developed that can help a radiation oncologist understand the relative risk that a mammogram is showing a true positive cancer indication.”

Research is conducted and data is recorded in a large online database, allowing scientists from around the world to collaborate across time and space.

If an improved computer algorithm for mammogram screenings is found, a team of advisors that includes radiologists and breast cancer specialists will help move it forward to clinical trials in hopes of eventual widespread use, Norman said.

“We see this as the beginning of a research project, not the end,” she added.

The mammography challenge is one about 40 DREAM challenges that have been hosted online since 2006. The challenges are a different approach to traditional academic research in that participants do not reap as many individual benefits.

The common strategy in each challenge is to make large volumes of data accessible to large volumes of scientists in both medicine and computer science, so that biological patterns can be identified faster and more accurately.

“I think we’re going to see a lot more of this, not only in radiology and breast imaging, but in all of medicine,” Hawley said, adding that no one from OSUCCC–James is participating in the challenge.

The Mammography Challenge winners will be announced in spring 2017.

And the participants have more incentive than answering a key question in human medicine — their sights are on the $1.2 million in cash prizes, funded by the Laura and John Arnold Foundation, a private foundation in Texas that invests in various philanthropic initiatives.

Beyond CAD software, another promising technology for breast cancer screening is 3-D mammography, in which multiple X-rays are reconstructed into a 3-D image of the breast, decreasing tissue overlap.

“If we can reduce tissue overlap, most studies are showing that we can lessen false positive recalls by about 30 percent,” Hawley said, adding that the James offers 3-D mammography at the Stefanie Spielman Comprehensive Breast Center and has plans to expand it elsewhere.

The original story was published in The Columbus Dispatch’s 2016 Pink Papers special section.