Faithful Forgotten Best Friends has supplied free pet food and veterinary care to these animals since the organization began five years ago.

“Our alliance with OSU’s College of Veterinary Medicine gives vet students a chance to interact with demographics that they perhaps wouldn’t typically see in their future practice, and they get a lot of hands-on experience,” said FFBF co-founder Constance Swackhammer.  “Most of these animals would not be able to receive treatment otherwise.” 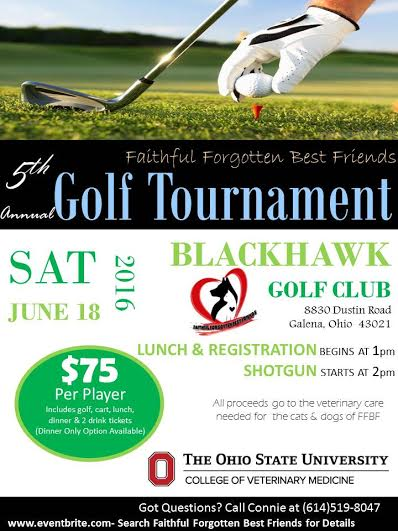 This year, Ohio State’s College of Veterinary Medicine is the primary -or “Top Dog”- sponsor for FFBF’s annual charity golf outing, which takes place from 1-6 p.m. on June 18 at Blackhawk Golf Club in Galena, Ohio.

The money raised from the event will fund FFBF’s supplies and services for the year, Swackhammer said, noting that the organization doesn’t have the time or resources to do frequent fundraisers. This includes necessary medicine such as vaccines, heart worm tests/meds, antibiotics, flea/tick meds and spaying and neutering procedures, among others. The proceeds will come from fees for golfers ($75) and a dinner afterward ($25), as well as donated raffle and silent auction items.

“When I started FFBF, people really didn’t get it. They said ‘you want to help homeless and poor people take care of animals? Well they can’t even take care of themselves, so why would you want to do that?’” Swackhammer said. “And the reason is that many of these people are in a temporary situation, and chances are they’ve already lost everything but that pet, which is the last bit of normalcy in their lives.”

People will often do anything to keep their pet fed, including feeding the pet their own food.

“Our clients are men, women, veterans and families. Often these folks have lost their job, car, home and have also become estranged with their family. With FFBF and Ohio State, their animals get the same great care that every pet deserves, regardless of the owner’s housing situation,” Swackhammer said. “We offer help without any judgment – only kindness to people and their ‘best friends.’”

If a pet is healthy, vaccinated and “altered,” finding a place to live is much easier, she added, noting that the ultimate goal is to get these people off the streets.

“Homelessness and poverty are situations that all major cities in the U.S. are working on, not just Columbus. Columbus has always had services to help the people, but no one had been providing help for the pets,” Swackhammer said. “We have seen many of these folks get back into housing, and they’re able to take their pet with them. That’s the icing on the cake!”

But in the meantime, FFBF has the simple aim of promoting the human/animal bond by keeping these animals medically well.

FFBF has several ground rules for those who benefit from their services. First, they can only receive care for their personal pet, and second, they must allow FFBF to spay or neuter the pet, unless there is an extenuating medical circumstance.

“For us, spaying/neutering is the holy grail,” Swackhammer said. “Our organization is trying to keep pets from ever having to go to the shelter.”

FFBF volunteers provide veterinary services every first and third Tuesday of the month, from 9:30 a.m. – 12 p.m. (appointment only) at the Holy Family Church Parish Center, located at 588 West Gay St., Columbus, OH 43215. FFBF also distributes pet food, donated by Blue Buffalo, from 1:30-3:30 p.m. on the same days. There are income requirements as well as current limitations in certain high-poverty areas.

This summer, FFBF is being featured as part one of a three-part documentary called “Poindexter,” which was shown at the Film Festival of Columbus on June 6. Watch the trailer here. 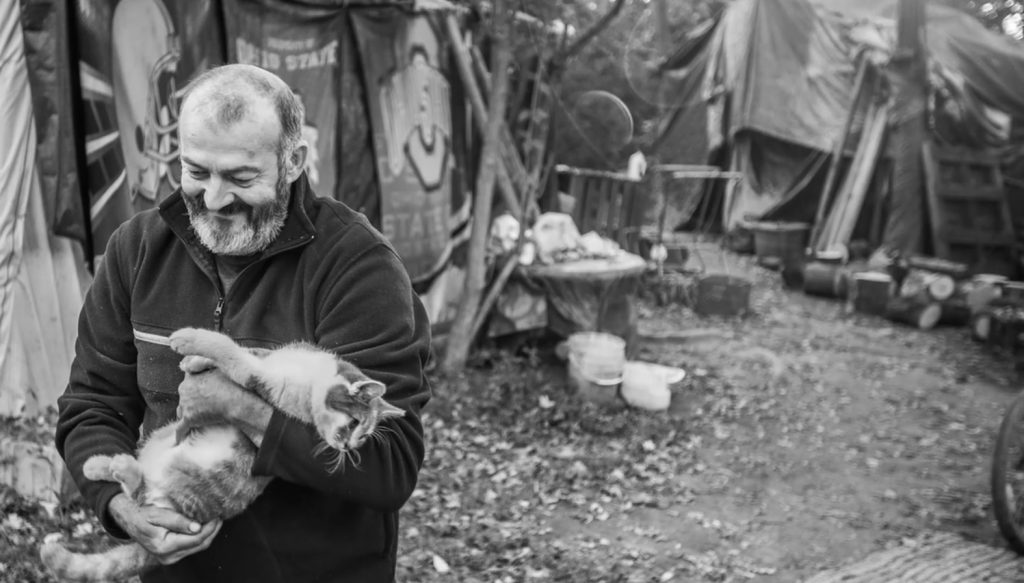 Screenshot from “Poindexter,” a three-part documentary that features Faithful Forgotten Best Friends. The film was shown at Film Festival of Columbus on June 6.